BeSoccer hace 12 días 1.3k
Pique and Jordi Alba will be two players that will be taking a wage cut. EFE
Barcelona continue to navigate through their delicate economic situation. As 'Sport' have reported, the club are looking into applying the same formula that they carried with Messi to a host of their other big name players. Namely, Pique, Busquets, Jordi Alba and Sergi Roberto.

Barcelona have started to do the maths. Everyone at the club is aware that their economic situation is one of the most delicate that they have experienced in the last few years. Every cent counts.

It's for that reason that, once Leo Messi's contract extension - with a reduced wage - is confirmed, the next deals that the club will have to face will be the portion of salaries dished out to a number of important players.

As 'Sport' have reported, the standout names in this regard will be Sergio Busquets, Gerard Pique, Jordi Alba and Sergi Roberto. In other words, players that have come through the ranks, who are fundamental pillars of the side and, accordingly, earn a decent wage. 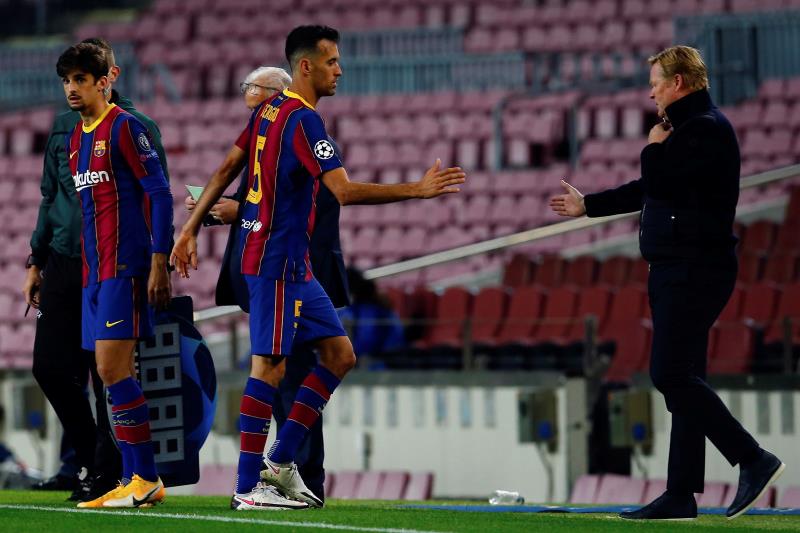 At the Camp Nou they feel that if you want to continue wearing the blue and red of Barcelona, you will need to make a sacrifice. The goal isn't only to register their Argentina star, but also their new signings, which currently stand at four - Emerson, Memphis Depay, Eric Garcia and Sergio Aguero.

Joan Laporta's idea is to have the accounts straightened out in time for the new season. The Catalan club don't intend to leave things till the last minute - as has happened in previous years - for which reason the negotiations of the aforementioned big names could come to fruition a lot earlier than expected.

Meanwhile, talks with Atletico Madrid continue to rage on over a possible swap deal between Antoine Griezmann and either Saul Ñiguez or Joao Felix. The Frenchman is on one of the highest wages at the club, although it remains to be seen what salary the two Atleti players are on before a decision is made on bringing them in to Barcelona.

Transfers and loans out of the club have also provided Barca with an effective escape route with which to alleviate their impressive wage bill. Up till now, Miranda, Matheus, Fernandes, Trincao, Aleña, Konrad de la Fuente, Todibo, Junior Firpo and Monchu have all left, not only freeing up room for players to register with the league, but also allowing the club to potentially bring some new names in as well.